Triceratops is one of the most common herbivores of the Late Cretaceous. Standing 10 feet tall, measuring 30 feet long and weighing 8 to 10 tons, it was the most successful and denfesive herbivore. It's also a fantasic fighter, resembling like todays' modern rhinocerus, buffalo, and big horned sheep.

We have discovered more than 50 skulls of this species in the Hell Creek Formation alone. Since we been studying bones for over 150 years, we have been also trying to figure out how the muscles and skin would've been placed on the bones. We studying the famous skull, Richard Swann Lull, an American palentologist saw that the bony fill may have served as anchor points for the jaw muscles to aid chewing by allowing increased size and power of the muscles. However, later studies can't find any evidence of large muscle attachments on the frill bones. Since we don't have any idea of how the muscles layed on the bones, or what the skin actually looks like, but we can give a guess of what they used to look like in the popcultural world. 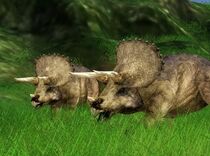 Living in the late Cretaceous period, 65 million years ago, Triceratops has adapted to the polluted environment. According to certain palentologists, there were no grasslands over of the flooplains, however, there has a large areas of ashfields with conifers tree forests. With the right environment, the grazing herds have the best place to survive.

Obvissuly, Triceratops is an herbivore, but its salad menu is still a puzzle. Judging by the position of the bones, there was possibly evidence that it was browerser like modern day rhinos. Consuming a large amount plant matter such as 24 pounds when its a junvellie and about 6 pounds a day to reach the full 8 tons when mature. Besides having a large gut, this herbivore has a strong but powerful beak. It's so powerful that it can snap off tree branches the size of a human arm.

When it comes to competing for a mate or fighting off a predator, Triceratops is no different when is war is everywhere. Having 2 large, 3 foot horns extending from the bony frill. By an estimation of how much force can go into a hit when the jab their horns into a enemy or when they collide against together.