The Cretaceous period was the third and final geological period of the Mesozic Era. Starting from 145 million years ago, dinosaurs were still roaming the earth, most of the species that evolved in this period have grown to emise sizes and most of them also have the best defenses. By the end of the cretaceous period, 65 million years ago, the great reptiles (dinosaurs, pterosaurs, marine reptiles) have left this Earth by a large meteroite crashed into the Earth's crust around the gulf of mexico area.

The Cretaceous was also much different that what is it today. The landscape was much different also, the Atlantic ocean is half as wide than what is was today and the Himalayian mountains didn't exist yet. Most of the plant that existed in the previous periods (Triassic and Jurassic), conifer trees, ginkos and fern like plants are still around, but the most common tree in the Araucaria tree, which is a broaded leaved tree and is also called monkey puzzle. Also in the cretaceous period, the very first flowering plants evolved here, and the internal relationship between flowers and insects have started in the cretaceous.

These pictures are from Chile in South America that looks like the late cretaceous period. 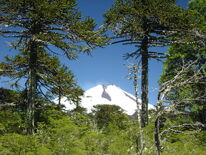 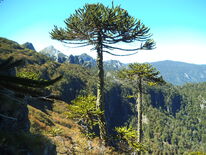 Plains with acuarria forest, lake and dormant volcano in distance

During the Early Cretaceous Period (145-100 million years ago), most of the dinosaurs are starting to change and grow since the Jurassic Period ended. Most of the sauropods are still around, the hadrosaurs and the ostrich like dinosaurs began to evolve here. While the herbivores grew to massive sizes, the carnivores have also gotten bigger and have a range of different weapons such as the raptors, with their sickle like claws. 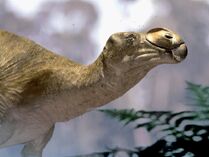 During the Late Cretaceous Period (99-65 million years ago), everything is still large and fearsome. Especially for the last 15 million years of the cretaceous period, when the king of the dinosaurs, Tyrannosaurus Rex and his brothers have started to stalk and hunt the landscape. 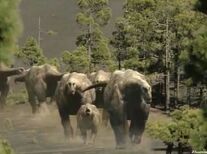 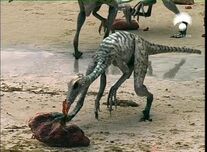 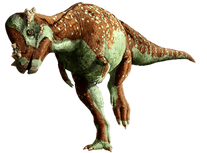 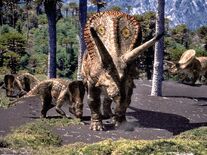