Dilophosaurus was one of the first medium sized theropods of the Early Jurassic Period. Being disocvered in the 1940's in Arizona by Samuel Paul Welles.

This carnivore is at least 23 feet long and weighs over half a ton. Most of the fossils have been in the Arizona state, mainly in the Kayenta Formation. Not much is known between the difference between male and female. However, in Jurassic Park, the coloration will describe the difference between the two. Males have an olive color, with green blotches and white stripping on the body and crests. Females and juvillenes have a similar color, only they have a more drab green and paler markings. Dilophosaurus males also has two large crests, possibly used for attracting mates, fighting off other males in the group, and intimidating potential predators of other predators. 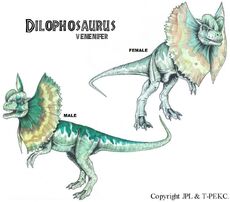 Dilophosaurus has 12 maxillary teeth in the upper jaw and 18 dentary teeth in the lower jaw. What it eats is other story, it's main menu of meat mainly consits from lizards to small ornithopods. It would mainly prefer fresh meat than scavenging other kills. However in Jurassic Park (1993), this carnivore has an extra feature. When the frill expands and begins to growl, it will release a cytotoxic venom to paraliyze its prey, similar to the spitting cobra. Unfortunatly, their have been no evidence of frills on any Dilophosaurus fossils. Mainly because the frill was a thin piece of skin, so we don't know if that is how it actually hunts or not.

Dilophosaurus reproduction is hard to tell what happens exactly. However, they're breeding season would be in the wet season. Their mating rituals would take place near rivers or other bodies of water. How does the male attract the female? The male and female will take turns to drink water, then hoot and snarl at each other, which can last for several hours. Then the male will initate a mating dance to real in the female. The male stands to his full height, moves around the female in a circular pattern, and bobbing his head to display the large crests. If the female is intrested, she will replacte the males movements. Once the two have paired up, they pair for life, both parents aid in nest construction, egg incubation and watching over the chicks.

In the science fiction world, Dilophosaurus has been brought back to life. It's not the most popular dinosaur, however, it has made a few appearances. For instance, in Jurassic Park (1993), it was the first carnivorous dinosaur and the very first attraction in the safari tour of the park. However, when the scientists where investigating the park, there no Dilophosaurs to be seen in their exhibit. During the blackout, the entire group of Dilophosaurus broke out and spread out around the island. Unfortunatly, a juvenille stayed behind and stalked Dennis Nedry (main computer programer). The young male seemed friendly and harmless, however, the mode began to change, and began to attack Nedry by spitting the cytotoxic venom into his eyes and eats him in the Jeep. In Jurassic Park Operation Genesis, Dilophosaurus is a two-star small carnivore from the Morrision B Formation. Dilophosaurus costs $2,085 and lives up 5 years at 100% DNA. 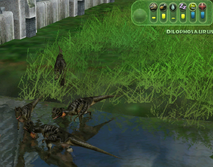 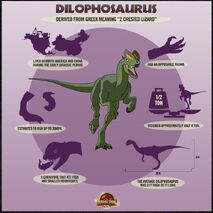