Hoping their way into the animal kingdom, evolving over 400 million years ago, and living two lives.Half of their life in the water and the other half of their life on the land. The amphibian groups mainly consists frogs, toads, salamanders, and caecilians. All together of these subgroup species, there are less than 7,000 species of amphibans and 90% of those species are considered to be frogs.

During the late Devionan Period to Early Caboniferous Period, the fossil record seems to tell that Amphibians evolved from some species of fish from the early gological years. By losing their gills, amphibians have evolved complex lungs like us and with the ability to walk on land, they've lost their fins and have grown limbs. To feed, the have evolved the best sets of jaws to devour any animal around them. 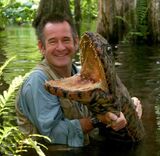